Designing conversational AI chatbots and what we can learn from IVR

Conversational AI chatbots are a hot topic. Looking at our Twitter and LinkedIn feeds, the interest and excitement bubbling around this area is vast. Having worked in conversational user experience (UX) over the last two decades,  it’s exciting to see that the industry is experiencing a rapid growth, and delving into emerging technologies like bots and agents.

However, the reality is that conversational interfaces aren’t a new thing. At VoxGen we’ve been designing and learning about conversational UX for the last decade. A lot of our early work focused on IVR (and that demand shows no signs of slowing down) but there’s no doubt that bots and agents are the new conversational AI interfaces that everyone is talking about.

There are two key areas where IVR and chatbot design are intrinsically linked: designing for conversation and persona. So, what can our experiences in IVR teach us for the design of these chatbots?

Watch our webinar: Simple steps to assess your conversation design

In a recent VoxGen and Forrester webinar on ‘Chatbots or Optimisation?’, Kerry Robinson (CEO at VoxGen) builds on the need to follow conversational norms by reminding us that language is an instinct and something that we learn from a young age. This means that it’s very difficult for us to unlearn. In conversational design, whether that be for an IVR or a chatbot, we need to leverage that instinct for language and design those conversational interactions based on how we talk to each other or how we text each other. And we need to follow the melody of language and to use terminology that is familiar to users.

The formality (or register) of the dialog will be dependent on the context and task, but conversational dialog is typically less formal than written content. Chatbot design is an interesting mix. On the one hand, we’re dealing with a visual interface but we’re also designing with ‘chat’ in mind. IVR has shown us that the appropriate use of contractions (e.g. isn’t, can’t, won’t rather than is not, cannot and will not) helps improve the flow of the conversational AI interface without impacting negatively on brand perception.

When we’re having a conversation with someone, context is often implied by what has been said previously as well as non-verbal cues – hesitations, tone of voice, body language. When designing IVRs and chatbots, we need to think about how we can imply context without repetition of being too formal. Take this IVR example from a credit card payment. The first example follows conversational norms while the second example follows written dialog norms:

When you read this second example in your head, it may sound OK. But now read both versions aloud. Notice the difference? In usability evaluations, the first approach gets better results because it mimics the norms of conversation, matching users’ mental model of what a conversation would sound like if they were interacting with a live person. The second example in comparison is often perceived as long-winded, less efficient and too formal.

As with IVR, chatbot interaction is also about designing a two-way conversation so it’s important to design to the same conversational norms that we would follow when designing an IVR. However, there is a balance between being overly conversational in chat while still portraying professionalism.

One interesting area of continued investigation related to formality in chatbot design is the use of emojis and ‘text speak’ e.g. LOL, TTFN. From our experience, the decision to use these SMS elements is as much about concerns over brand perception as the actual task at hand. Adding a ‘smiley’ in a response to a complaint for example is clearly not a great idea. But some brands also worry that using these elements reduce the perception of professionalism. The impact and relevance of use needs to be judged on a case by case basis, but essentially the only way to determine how users will react to the use of emojis and text speak is to test with users.

The formality of conversation appropriate to chatbots is something that we’re currently researching, so more on that to come.

The importance of a chatbot persona

Persona relates to the character portrayed by the interface – not just the voice but also dialog style. In IVR, we know that callers will make an impression based on their perception of the persona (or character) they are dealing with. When we’re designing an IVR persona, there is a formal process that we go through, based on research, to make sure the persona is relevant and applicable to the brand, caller population and reason for call. We therefore start with context research to understand the callers and their tasks and the brand attributes that need to be portrayed by the IVR persona. It’s also important to evaluate the persona with representative users to ensure the persona design matches brand and user expectation.

The same is true for chatbots. When we’re designing the conversational AI dialog for a chatbot, we’re always designing with users, tasks and brand in mind. The same contextual research needs to be carried out in order understand how to portray appropriate persona characteristics through the chatbot dialog.

In a recent text messaging chatbot usability evaluation, insight showed us that users liked the conversational AI dialog style, but their expectations of using SMS to contact a company was very different to that of how they would interact with a friend. Not surprisingly, the chatbot dialog needed to be friendly but also professional. Interestingly, we didn’t initially tell participants that they were interacting with an automated system and the dialog didn’t explicitly state that they were interacting with a bot.

The conversational style of the dialog and usability of the system meant that all but one participant felt they were interacting with a live agent. While SMS content from participants started formally, towards the end of an interaction, those responses became increasingly more informal. It would be interesting to investigate whether this changes when participants know upfront that they are dealing with an automated bot.

Our research has highlighted that our learnings from IVR design can be applied to chatbot design , particularly in terms of designing conversations and creating the right personas. There are of course differences in terms of context and interaction modes that will impact user expectations and behaviors, but the fundamental principles of conversational AI design and persona learnt from IVR can be consistently applied to chatbots. 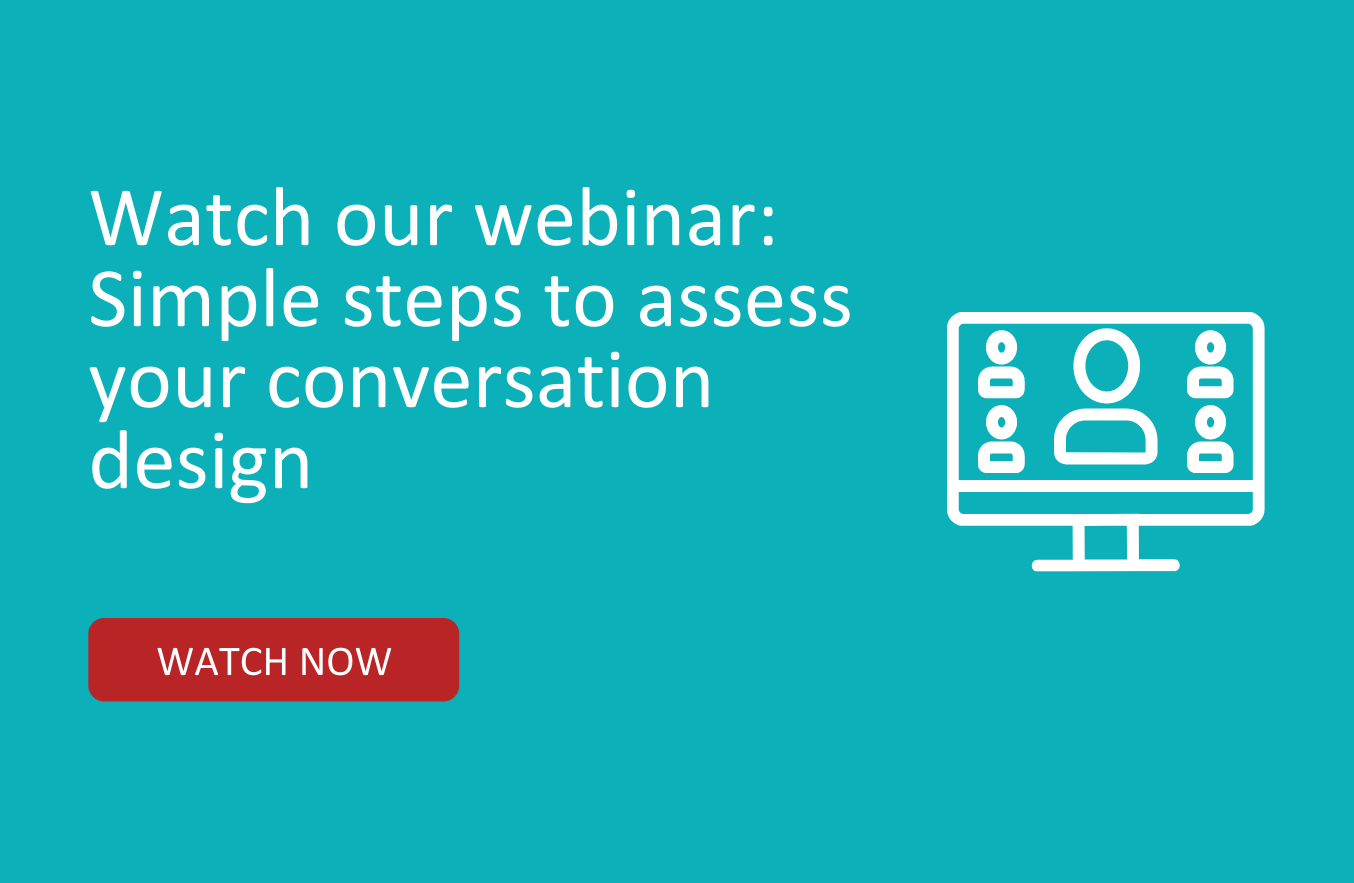 Designing conversational AI - The 5 decisions you need to make

With the surge in voice-controlled devices, conversational interfaces for virtual assistants are...

It wasn’t too long ago that the only way customers could have a ‘conversation’ with a company was...

When it comes to designing great IVR and conversational AI user experiences, understanding and...