Fixing your IVR starts with listening to your customers

The secret to a brilliant IVR experience? Listen to your callers.

Looking to revamp your IVR? Listen to your callers first.

IVR is a hated customer service channel, but it doesn’t have to be. Listening to your callers, and adjusting your IVR to meet their needs, can pay huge dividends.

In 2014, 43% of respondents to a Which? survey said it was their biggest customer service irritation.

And on Twitter, you can’t move for people venting publicly about IVRs that wasted their time, cut them off, wouldn’t let them talk to an agent, or were just generally complicated and irritating.

So if everyone hates it, why is so much IVR still so bad?

In our experience, one reason is that nobody knows how to make it better. Most IVRs are legacy, black-box applications that were implemented in the 90s. IT folk have forgotten how to program them (if they ever knew), and the documentation has long been lost. A lot of companies have just given up on their IVR, or plan to replace it in a glorious omni-channel revamp at some future date.

But making tactical improvements to your IVR can actually be quicker and easier than you think – and the results can be well worth the effort.

We’ve just published an ebook with seven “guerrilla fixes” to make your IVR a much more pleasant experience for your customers – and a much more efficient channel for your business.

In this blog, we’re going to look at the first of those fixes. And it doesn’t involve a single line of code.

The best IVRs are ones that address callers’ needs quickly and efficiently. To know what your callers need from your IVR, you first need to know what they’re calling about.

Astonishingly, many IVRs are designed without investigating this, and are instead arranged according to internal business goals: “Press one for sales, press two for support”, etc.

So listening to incoming calls is a vital exercise for improving the customer experience of your IVR.

How a call listening exercise works

In a listening exercise, a CX analyst or voice UX designer sits with your contact center agents for up to a day and listens in to incoming calls. They categorize and rank what the calls are about and make note of the language and terminology callers and agents use to describe things.

The listening exercise can also be supplemented by asking agents for their general experiences: “That caller said he was having trouble choosing the right option in the IVR, does that happen often?”

The notes from the listening exercise can be used to guide high-level design updates to the IVR, such as re-ordering menu options or re-recording voice prompts using more familiar language.

Listening leads to huge improvements for one US insurer

Making fixes based on a listening exercise can have a major impact on call resolution times and customer satisfaction. At one major U.S. insurer, an exercise we conducted led to staggering revelations about how poorly served the company’s customers were by the existing IVR.

The company was running a “natural language recognition” style IVR, which lets callers talk in their own words, and then uses natural language processing to recognize what they’re saying. But that only works if the IVR is continuously “taught” new words that callers might be using.

In this case, the IVR had never been taught any new words, so over time, it got worse and worse at understanding what people were calling about, and less and less able to route them to the right agent.

(We call this type of neglect “IVR rot”, and it can be incredibly damaging to your business.)

Our listening exercise not only revealed that people were having a hard time making themselves understood by the IVR. It also revealed that callers were unsure of how to respond to the IVR’s prompts. They often ended up just saying something they thought might get them put through to an agent – any agent – even if it had nothing to do with their actual reason for calling.

Together, these issues meant callers had to spend longer than necessary in the IVR; they got routed to the wrong agent; or they abandoned the call without getting the help they needed.

Listening reveals a better way to approach the IVR

The listening exercise also revealed a crucial fact: there were actually very few reasons for someone to call. Mostly, people wanted to file a claim, get a quote, make a payment, or inquire why their premium had increased. There was no need for expensive, hard-to-manage natural language recognition. A simpler IVR solution would do a much better job.

Based on that insight, the company replaced its natural-language IVR with a simpler-to-manage, directed dialogue system. It’s easier to keep up to date, and gets callers the right help, fast.

In the first three months, the company saw an 8 point rise in customer satisfaction with claims calls. Not only that, but call abandonments also dropped by 4%, average time spent in the IVR fell from 57 to 38 seconds, and calls to the main contact center reduced by 6%, thanks to data-driven routing.

Which just shows, when it comes to fixing your IVR, it pays to listen first.

Look out for more posts in this series soon, or download the complete ebook: 7 Quick, Low-Cost Ways to Take Your IVR from Good to Great. 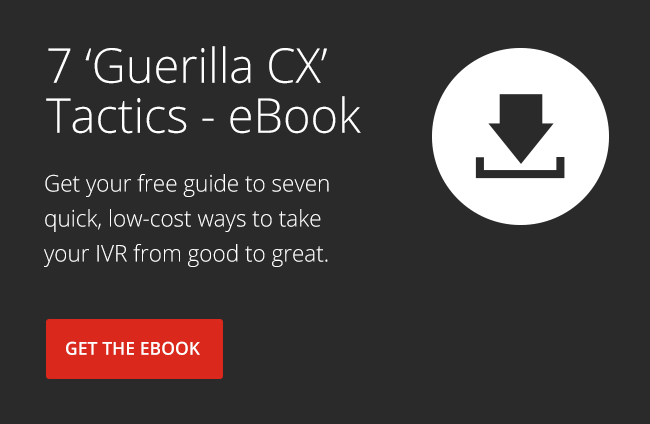